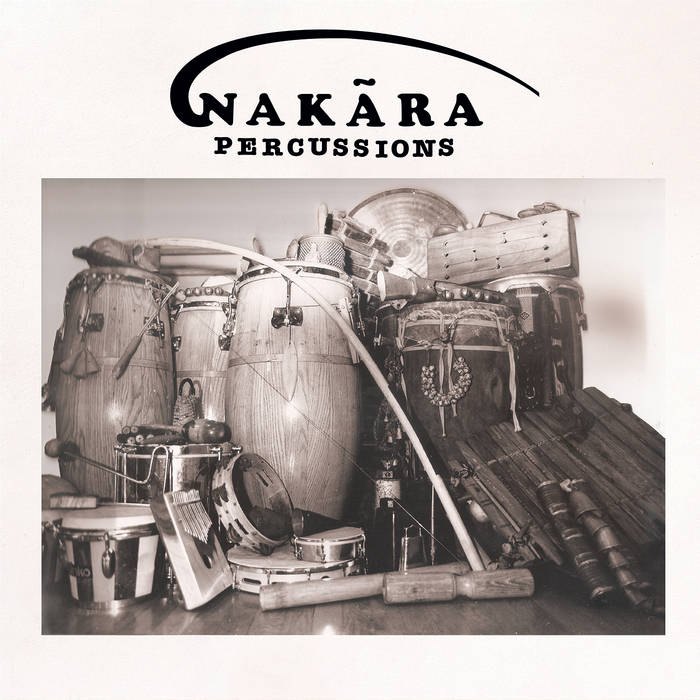 DJ Angel B! aka: Soulfrica

Founded by long-time friends Gerard Kurdjian and Stéphane Olivier alongside compatriot Christian Berthier in 1983, Nakara Percussions was a trio from the south of France, fascinated with percussion instruments, rhythms and textures from across the world.

Steeped in Jazz and ethnographic recordings, the trio designed and built their own instruments and played across the South of France throughout the 80s, recording a single album in the tiny village of Alliens in 1984.

Self-produced and mainly sold at gigs, the record reflects the inquisitive, experimental approach of the group and has become a cult album among DJs and music lovers for its blend of complex rhythms and organic soundscapes, taking in everything from Brazilian batucada to Indian tabla rhythms by way of West African thumb pianos and the drums of the Maghreb.


“Nakara Percussions came into being in 1983. Stéphane both lived in Grasse were both percussionists. We asked Christian Berthier to join us – he was an excellent drummer who also lived in the area. He brought a lot of skill to the group, and there were more musical possibilities as a trio than a duo.
Later on - after we had recorded the album - we were joined by Jean Luc Cedaha, a superb percussionist who had been a member of the famous Zaka Percussions group (led by Guem) in Paris in the 70s.
The name of the group comes from the Naqara, known in Medieval Europe as the Nacaire. It was a musical instrument used by the Saracen armies – big drums that were mounted in pairs on the backs of horses or camels and used to set the pace for the soldiers.
We liked the idea of these big drums being used
to lead the charge so we named the group after the instrument.
The idea behind the group was to summon the sounds and textures of different music from around the world: Africa, Asia, Brazil, the Caribbean, Cuba, India, the Middle East and so on.
At the time there was nothing else like it in the area but we knew some local jazz musicians in Grasse and Nice – we didn’t share the bill with them as a group but often played percussion at their concerts. The rock and jazz scenes didn’t really have an impact on what we were doing, even though we were (and are) big fans of Jazz.”
Gerard Kurdjian, September 2018

“The studio we used for the album was run by our friend René Kamoun in the little Provençal village of Alleins. It had a real family atmosphere, very calm and perfect for working. We spent a week recording the album, often working15 or 17 hour days - it was very intense. We recorded most of the
instruments separately then mixed them with the sound engineer afterwards. It was hard work - there were no computers at the time, we
just had a click track in our headphones for the tempo and the studio was full of flies! My father helped finance the recording session and we pressed 1000 copies of the LP, which were mostly sold at gigs.
In the group I mainly played the base rhythms – Gerard was very good at playing the smaller percussion instruments and the textural parts of the tracks.
There wasn’t really a scene for the music in the region but there were things happening elsewhere – people like Guem and Zaka Percussions and Henri Guedon.
We played in all sorts of places big and small, festivals, cultural centres and jazz clubs. I remember we played before Ghetto Blaster and Eddy Louis – we even played in a modern art exhibition.
People were amazed to see so many instruments on the stage – I think this is one of the things that allowed Nakara to speak to so many different people and different tastes.
There were all sorts of people at the concerts, young and old. The sound of percussion is something that is in all of us and speaks to everyone, even if there isn’t a particular genre classification for the music.
We weren’t trying to make a statement, we just wanted to play the instruments that were close to our hearts. For me this is organic music, it’s alive.”
Stéphane Olivier, September 2018

Komos is a Paris-based jazz label. We provide a fresh platform for both emerging and established musicians to explore & promote new musical angles and approaches, hosting recording sessions in the historic Studio Pigalle in the 9th Arrondissement.

Bandcamp Daily  your guide to the world of Bandcamp

New sounds from Mavi, Ivy Sole & Moderator, plus AJ, the One joins the show, for her latest release